Are VS1 Diamonds Right For You?

From the moment you first started trawling the internet for clues over how, where, and when to start looking for an engagement ring, you’ve probably seen the subject of diamond clarity raised more than almost any other. Chances are, however, that you’re still not totally clued-in when it comes to what clarity means, and why it matters so much to your future diamond engagement ring.

In reality, the term ‘clarity’ refers to just one aspect of any given diamond – but it’s a pretty significant one. Representing the absence (or, of course, presence) of flaws within a diamond, understanding the clarity grades enables you to make a reliable, quick, and simple judgment over any diamond’s quality.

These flaws, known as inclusions, can be so small that we would never see them without a magnification tool – or they can be big enough to totally impair or undermine the beauty of a stone. To that end, they can be small enough to entail a high ticket price, or big enough to make the diamond far, far less valuable on the market.

VS1 diamonds are, by definition, diamonds that feature inclusions, and yet they are still one of the most coveted categories of diamond on the market today. Why? Because, while it’s not perfect, a clarity grade of VS1 offers a great level of reassurance that most of the inclusions are barely noticeable to the naked eye.

First off, What is a VS1 Diamond?

If a diamond is labeled as VS1, this specifically refers to its clarity (more on that below) or, more specifically:

You can browse all VS1 diamonds here, or read our full guide to this popular clarity grade below.

To understand what a VS1 diamond grading is, it’s important to first understand the most reputable scale used for evaluating a diamond’s clarity – the GIA grading scale, which will be something that you will need to continuously refer back to until you have settled on the right diamond for you.

The diamond clarity scale for GIA contains the following grades, with VS1 located between VVS2 and VS2:

A diamond’s clarity can affect its price, since any noticeable inclusions – even if they are very, very minor – will decrease its value on the market.

But what about eye clean diamonds? We’re pretty sure you’ve already seen a few mentions of those – and for good reason.

Eye clean diamonds are not represented by their own category, since eye cleanliness entails a certain degree of subjectivity. What an experienced jeweler who has been working with diamonds for half a century already sees is going to be pretty different to what you see, after all.

Diamonds that the majority of us would consider eye clean are included within the clarity spectrum and can be found in various grades, even as low as SI1 or VS2 diamonds. Not all VS2 or SI1 diamonds will be eye clean, as this depends on other factors too, but it is entirely possible to find them at these lower grades.

What is VS1 Clarity?

VS1 is the fifth grade on the GIA Clarity Grade Scale. It stands for Very Slightly Included, meaning that, while a VS1 graded diamond does feature ‘birthmarks’ within its internal structure, these birthmarks are still incredibly minor, and barely noticeable.

In fact, diamonds with a VS1 clarity grading typically only have inclusions that are just barely visible under 10x magnification. And, even with magnification, it can take several seconds until the blemish spot is located.

Inclusions with a VS1 grading are hardly noticeable to the naked eye, especially in diamonds that are less than 2.0 carats. A VS1 diamond is one of the most affordable diamonds you will find without any visible inclusions.

Are VS1 Diamonds Eye Clean?

In the majority of diamonds, yes, a clarity of VS1 will mean that your diamond is eye clean.

This is a great yardstick with which you can judge the quality of a diamond before you see it in person, but eye cleanliness is (by definition) always in the eye of the beholder. Diamonds have their own personalities, and you can only judge the full scope of a diamond’s beauty in person.

For instance, this 1.81 Carat F-VS1 Princess Diamond looks pretty much flawless on screen – and it’s not at all difficult to imagine that mesmerizing sparkle, so unique to the princess cut, sitting proudly in the center of an engagement ring like this Princess Cut Solitaire Engagement Ring in Yellow Gold.

Even so, there’s more to that diamond than we can convey on screen, and checking out these diamonds in person could take you in a totally new and unexpected direction. Use the GIA diamond reports as a way of ascertaining whether or not a diamond is up to your standard, but let eye cleanliness play a central role in your final choice.

Do VS1 Diamonds Sparkle?

Yes, provided they have an excellent and symmetrical cut.

Clarity only begins to impact a diamond’s sparkle when the inclusions and blemishes are far more severe than they are in VS1 diamonds. For sparkle, you need to be discerning about cut and, to a lesser extent, the type of setting you pick for your engagement ring.

So, you know where VS1 sits on the spectrum, and how it appears compared with other clarity grades, but chances are you’re still looking for more concrete terms. To that end, here’s what you need to know about actually paying for a VS1 diamond.

What is a VS1 Diamond Worth?

There’s no set price for a VS1 diamond, as each diamond’s cost depends on many other factors, too. You can expect to pay anywhere between $3,000 (or slightly less, although this would suggest a low grade for another of the four Cs) and $10,000 – or more.

VS1 diamonds are generally considered eye clean so, even though they do feature inclusions, they still command a high price on the market. They’re more common than IF and FL diamonds, but popular enough among those looking to purchase engagement rings featuring nearly flawless diamonds that they have earned a premium price.

Still, they remain a much, much more affordable option than diamonds that have been graded even just one step higher than VS1…

Is VVS More Expensive Than VS1?

Yes, a VVS1 or VVS2 diamond will cost significantly more than an otherwise similar VS1 diamond, although, visually, there will be very little difference between them.

For many buyers, VVS diamonds rarely turn out to be worth the premium price they fetch on the market. Since VVS is just one grade below Internally Flawless – and rare in their own right – they’re pretty highly regarded among those who spend their lives studying these fascinating gemstones.

They can, however, cost up to 20% more than comparable diamonds graded at VS1 – and, for the average buyer looking to find the ideal center diamond for their engagement ring, this 20% price hike is rarely worthwhile.

For instance, the average shopper would find it pretty difficult to spot the difference between this 3.01 Carat H-VS1 Cushion Diamond and this 3.02 Carat G-VVS2 Cushion Diamond – unless, of course, they took a look at the price, which could be significantly higher for the second diamond.

Is VS1 More Expensive than VS2?

In general, yes. A VS1 diamond will typically cost about 10% more – unless, of course, that VS1 diamond is significantly smaller, or features a low color grade.

Some VS1 diamonds that suffer from poor color, or a very low carat weight, will cost less than diamonds with a lower clarity grade. In general, though, the higher the clarity grade, the more expensive the diamond will be.

VS1 Diamonds vs VVS Diamonds

While we can easily tell you that VS1 diamonds are an excellent choice, both in terms of cost and eye cleanliness, the fact remains that VVS diamonds are objectively better – at least, if you’re going by the GIA Scale alone. But how do you find a good balance for you?

What is the Difference between VS1 and VVS?

The main difference between a VS1 diamond and a VVS diamond is price, since the physical difference exists on such a small scale (usually only visible under 10x magnification). This is why VS1 is such a great idea for shoppers.

So, if you are more concerned with price – and with ensuring that your money goes toward the tangible factors, rather than what’s printed on the GIA report – the VS1 diamond is the best choice. If clarity is more important, then a VVS diamond is the better choice.

VS1 Diamonds vs VS2 Diamonds

One of the trickiest things to get your head around as you’re finding your feet in the world of clarity grades is the incredibly minor differences between VS1 and VS2, which seem to impact the cost of the diamond more than its appearance.

Is a VS1 Diamond Better than VS2?

Yes, but both diamonds can still appear as eye clean, so it could be the case that you find a truly beautiful diamond at a lower price point, simply because it’s VS2 grade brings down the price.

These days, many shoppers are looking to impress their brides-to-be with an above-average size of diamond, and that means that any imperfections on or within the diamond are a little easier to spot. This is another reason why VS1 is generally considered better than VS2 since, while the latter can produce eye clean diamonds, it can impact the appearance of a stone more if that stone boasts a large carat weight.

Just keep in mind that eye cleanliness is key to a good diamond, and always see the diamonds in person before you make your final decision. Digital images are often made larger, so that you can inspect the diamond as much as possible over the internet, but that can also mean that very minor inclusions look far more significant, and could lead to you turning away from a beautiful diamond.

So, while you’ll definitely benefit from doing all this research online first, it’s always best to use our Jewelry Store Locator to find a reputable, local jeweler capable of guiding you through the final phase of this journey, and ensuring you make the very best choice possible for your bride to be.

Our Summary: Is VS1 a Good Diamond?

VS1 is a great clarity grade to aim for – and, in our opinion, the definitive sweet spot between ‘too much’ perfection (and the high cost of it), and too many flaws. Even so, its beauty can be rivaled by diamonds with the ever-so-slightly lower clarity grade of VS2, which is something to keep in mind as you tailor your search to your budget for this ring.

Obviously, the fact that VS1 is widely regarded as a good middle ground between both ends of the GIA Clarity Scale means that it is able to command its own premium price on the market, although this price will still be substantially lower than a VVS diamond.

In our opinion, the high regard VS1 diamonds have earned among jewelers is worth the extra investment – provided, of course, that it does not come at the cost of one of the other four Cs. When it comes to Color vs Clarity, we generally consider clarity to be a little more important, but that’s not to say that you can forget about color all together.

In other words, a VS1 Diamond is a great choice provided it is combined with other ‘sweet spots’ when it comes to color and cut, and a carat weight high enough to make a statement worthy of representing our love for your bride to be. If that turns out to be a struggle, then VS2 diamonds – provided they are not too big – can rival their beauty and high level of eye cleanliness. 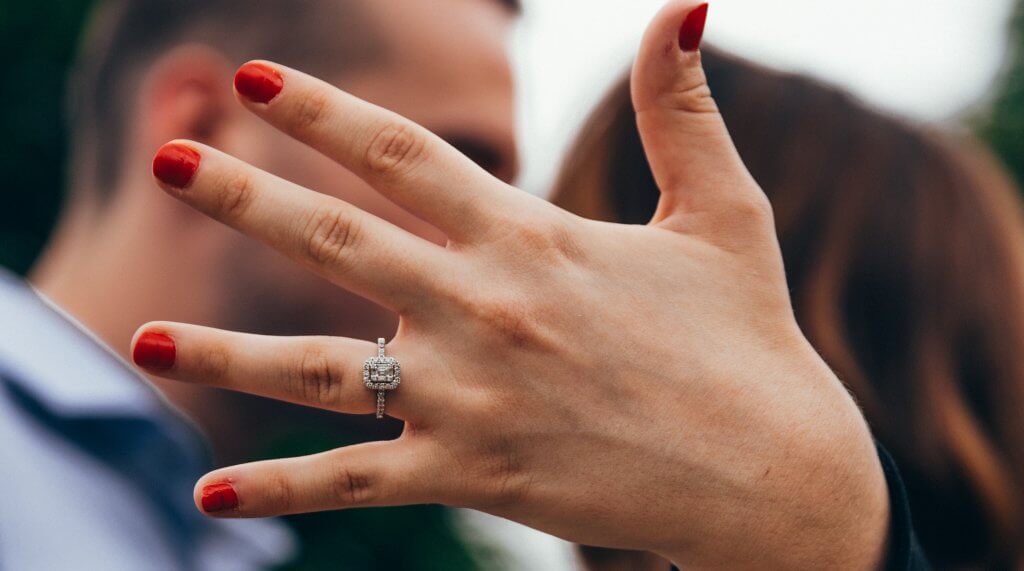 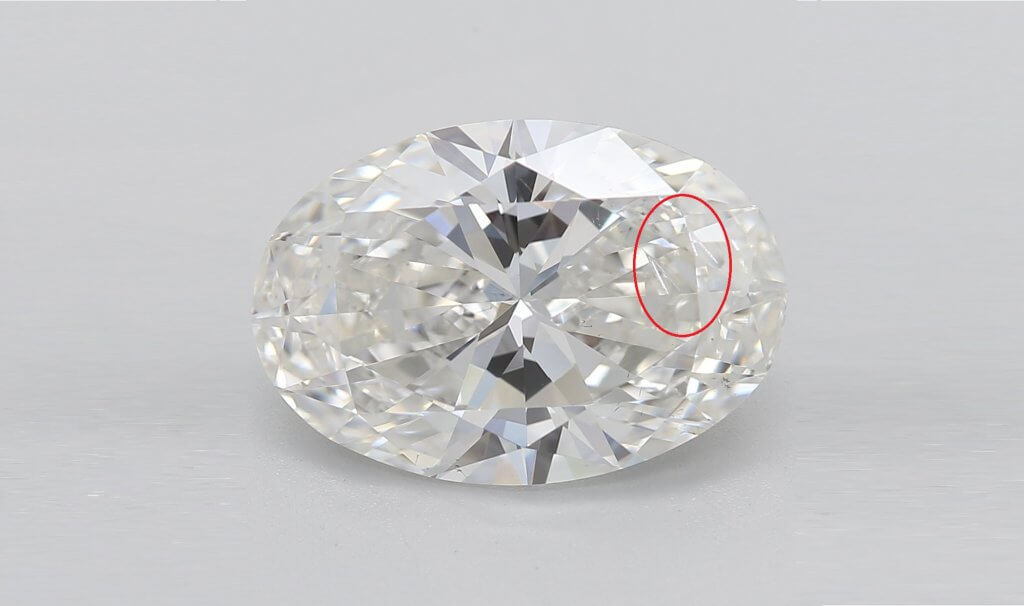 The Surprising Facts About Diamond Feathers

Why Flawless Diamonds May Not Be Worth The Investment