The Unexpected Side Of VVS Diamond Clarity Grade

This can feel like a big step for any diamond shopper. You know that it’s easy enough to save yourself thousands of dollars without it actually looking like you’ve saved money on the diamond.

The next big hurdle, however, is figuring out how far down the clarity scale you really can go before the diamonds you’re looking at actually start to look included, blemished, or, worse still, lacking in sparkle. VVS? VS? SI?

The answer lies in getting to know each of these unique clarity grades – and what they mean for the diamonds that feature them in their GIA Reports. Here’s everything you need to know about the VVS grade.

From what the expert diamond grader sees to what you, your bride-to-be and her eagled-eyed friends and family are going to see, here’s the lowdown on what VVS represents in your report.

What Does VVS Mean in Diamonds?

VVS is an abbreviation that means ‘Very Very Slight Inclusions’, and it will either be presented as VVS1 or VVS2 in a GIA report.

The VVS grade enjoys a high position on the clarity scale – and, as a result, attracts plenty of interest from collectors and first-time shoppers alike. It represents the first grade that can be used to identify diamonds with internal flaws, since IF diamonds (the second grade on the scale) are those that have blemishes (external), but no inclusions (internal).

The GIA’s own definition for VVS diamonds is as follows:

Yes, although the same scales are used to ascertain the clarity of synthetic diamonds.

This can seem a little daunting to some people but, provided you work with a reputable jeweler, you won’t risk investing into a synthetic diamond when what you’re really looking for is an earth created diamond.

How Do VVS Diamonds Look?

VVS diamonds will be eye clean, even in diamonds with a larger carat weight. Without a microscope, you will not be able to spot the difference between a VVS and an IF diamond.

If you’ve spent any amount of time researching diamonds, you will probably already realise that eye clean diamonds are given a lot of attention among jewelers and shoppers, regardless of clarity grade.

Of course, some clarity grades are a little more giving than others when it comes to eye cleanliness. It is possible, after all, to find eye clean diamonds as far down the scale as SI2, but actually tracking them down won’t be anywhere near as easy as it is for VVS1 and VVS2 diamonds.

We’ll go into why this matters so much for you during your search for the perfect diamond below but, for now, it’s enough to say that VVS diamonds will look perfect (provided, of course, that they’re given high grades for cut and color, too).

What is so Special About VVS Diamonds?

The odds of nature creating something that appears so close to perfect, even under a microscope, are incredibly low.

The world is full of experienced and dedicated jewelers who have yet to encounter a truly flawless diamond – and this is, of course, the primary reason (alongside price) why no shopper looking for their engagement ring should expect to invest in a Flawless diamond. Not only would it take tens of thousands of dollars (if not more), but it would also take a long, long time to find one available for purchase.

VVS diamonds aren’t flawless – that much is clear. But they’re incredibly close to flawless, with some diamonds featuring such minor inclusions that even an experienced grader would struggle to spot them.

How Rare are VVS Diamonds?

They’re much less common than diamonds with lower clarity grades since they have to sit on the very cusp of ‘flawlessness’.

One of the most important things to understand about VVS diamonds is that they are very rare, but they’re also nowhere near as rare as FL and IF diamonds. This makes them highly popular among collectors, since the odds of being able to find a genuinely flawless diamond are very, very low.

As a casual shopper, rather than a collector or jeweler, you won’t run into any FL or IF diamonds on the market. It is possible to find VVS1 and VVS2 diamonds for sale, despite the fact that they’re far less commonly found in nature than more heavily included (though, potentially, still eye clean) diamonds.

A VVS grade is more than enough to ensure a sparkly diamond, so long as it’s been cut to ideal proportions.

Some major inclusions can interfere with a diamond’s brilliance. For instance, cloudy diamonds, while pretty fascinating to look at, will look very dull and lifeless beside an eye clean diamond. The same goes for significant feather inclusions, which can totally derail sparkle (although most feather inclusions are unobtrusive, and won’t show without magnification).

However, inclusions anywhere near as bad as these two examples would warrant a much lower clarity grade – nowhere near the high standard requires for a VVS grade.

This means that you’ll never need to worry about the inclusions within a VVS diamond impeding sparkle.

Instead, you’ll need to focus on ensuring ideal diamond cut proportions – something far more important to sparkle than clarity.

In fact, you’ll get the same excellent light performance in diamonds much lower than VVS…

Is VVS Better than VS?

On paper, yes. The VVS grades sit higher than Vs1 and VS2, which are abbreviations for ‘Very Slight’ inclusions, meaning that these diamonds have a lower clarity than VVS diamonds.

So, while the VS diamonds inclusions are more significant than the VVS diamonds’ inclusions, are they significant enough to push you toward the higher clarity grade? No – not at all.

Without a microscope, the VS clarity grade bears a strong enough resemblance to VVS graded diamonds that it’s unlikely even a skilled grader could tell them apart. This is why we talk at length about eye cleanliness: it is much more important than what’s printed in the report.

So, is a VS diamond a better investment for you? Yes – we’re willing to bet that it is a much better choice.

What is the Difference Between VVS1 and VVS2?

While both diamonds appear eye clean, inclusions that warrant a VVS2 grade will be visible through the crown of the diamond (under magnification).

Other factors, such as the color of the inclusions (light or dark) and the number present within the diamond are considered, too.

VVS sounds like a good idea in theory. It’s a high enough grade that you won’t need to worry at all about possibly investing in a diamond with noticeable inclusions, but it’s not as rare or expensive as a diamond that is microscopically flawless. But, while it may seem like that ‘sweet spot’ on the clarity scale, the cost is still not worthwhile for shoppers.

How Much is a VVS Diamond?

A 1 carat VVS diamond will likely cost $5,000+, with the cost increasing significantly in larger diamonds.

If the diamond falls short in another area, such as Cut, it will likely cost less – but this does not represent an opportunity to snag a good deal on a VVS diamond, since the best investments are those that strike a good balance between each of the Four Cs.

Are VVS Diamonds Worth it?

In most cases, no.

For shoppers looking to create a beautiful engagement ring that lives up to their future bride’s dizziest daydreams? Definitely not. Lower clarity grades offer many, many more choices at far more reasonable price points, meaning that, with the same budget, you could afford to invest in a bigger diamond that looks no less flawless than the VVS options out there.

If you’re lucky enough to have no budget at all, then there’s nothing wrong with opting for a VVS diamond. But, if you’re under the impression that doing so will create a more impressive engagement ring, you’ll need to invest into a magnifying glass too, since that’s the only way you’ll be able to appreciate its superiority.

Our Summary: Are VVS Diamonds the Best?

VVS diamonds are incredible, but they’re rarely the best choice for shoppers on the hunt for the perfect diamond to place in their engagement ring.

But this is where we will always direct our readers back to the subject of eye cleanliness, and how its importance for anyone trying to make the best engagement ring possible for their future bride cannot be overstated.

In brief, no, VVs diamonds are not the best. They’re not capable of rivalling FL and IF diamonds in terms of rarity or flawlessness under the microscope, but neither are they capable of rivalling the prices of lower clarity diamonds, despite the fact that you would be incapable of distinguishing between them.

Save yourself the trouble of budgeting another years’ worth of savings towards your diamond engagement ring, and forget about the VVS grades in favour of VS and, potentially, SI too.

It can be daunting to intentionally turn away from the top grades, and to feel as though you’re lowering your sights on diamonds that are inferior in quality and value. This is why working with a jeweler you trust is so important. If you’re attempting to go at it alone and order your engagement ring online, it’s pretty likely you’ll talk yourself into paying more than you need to, since you’ll be afraid of making a bad choice. If you talk it through with your jeweler first – and, more importantly, see the diamond for yourself – you’ll start to feel a little more confident in your ability to say no to VVS1 and VVS2, and to embrace the incredible choices available at the lower clarity grades. 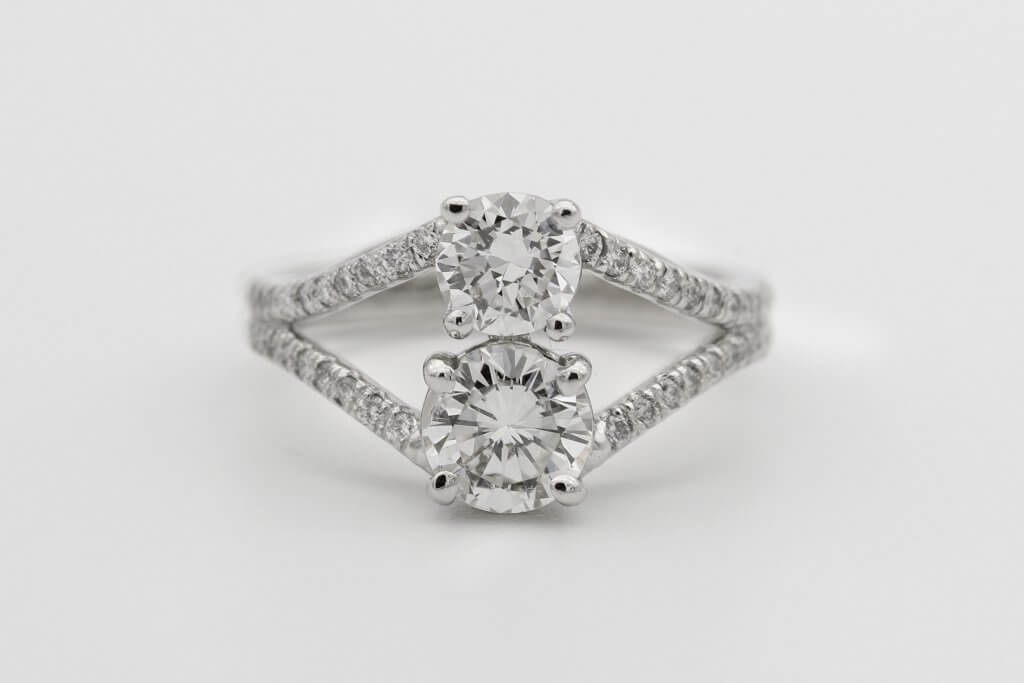 VS Diamonds: The Next Level Of Clarity 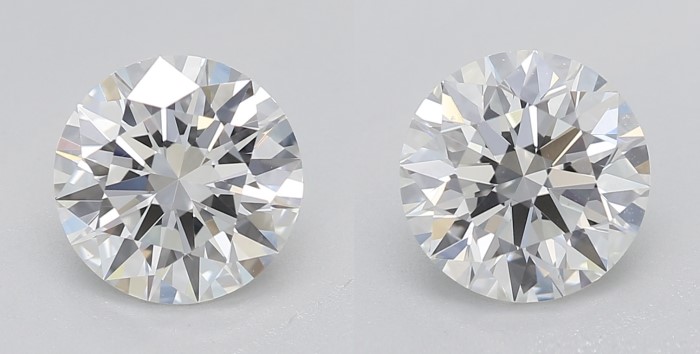 SI1 vs Vs2 Diamonds – Which One is Better?

A Must-Know Guide To Diamond Clarity I1 And I2