Odds are that, by now, you’ve done at least some of the required reading on the Four Cs of Diamonds. In the very least, you’re probably aware of the fact that a diamond’s quality is determined according to cut, color, clarity, and carat weight, and that these categories represent the most pressing things for any shopper to consider before committing to a diamond.

Still, there’s a little more to it than that. Diamond fluorescence represents yet another important conversation to have with your jeweler – and, as a result, an important subject to add to your radar as you begin your search for the perfect diamond.

Fluorescence can be a great thing for your diamond. It can also be a bad thing, and significantly lower the visual appeal and value of your diamond. Confused? Don’t panic – knowing the basics, and working with an experience jeweler, will ensure you don’t make any mistakes.

What is Diamond Fluorescence?

Some diamonds fluoresce, meaning that they glow under backlight. This glow is typically blue, although the glow varies from faint to bright – and, in more severe cases, can be to the detriment of the diamond’s appearance.

Fluorescence is not just a phenomenon reserved for white shirts under the disco blacklights – it’s also a pretty common occurrence in nature. Many minerals, from opal to fluorite itself, will glow under UV lights – diamond included.

The majority of diamonds glow blue under UV light – and not to the extent that the appearance of the diamond is impacted under usual lighting conditions, or daylight. Other diamonds will fluoresce different colors, such as red or green, but this is very rare.

Some diamonds, however, are so fluorescent that they can appear cloudy under direct sunlight. Their value can be lowered alarmingly, particularly if they have a high color grade.

Absolutely. Diamond fluorescence is entirely natural, and caused by trace amounts of minerals that react to UV light.

Diamonds don’t simply ‘turn’ fluorescent – it is something that occurs during their development underground.

As a result, you definitely don’t need to worry that a reaction to UV light (however minor) is a sign of a fake diamond. Provided the diamond you are looking at is accompanied by a valid GIA Report – which can be verified for authenticity via our Grade & Score Check – then you can be sure that the diamond is real.

Are All Diamonds Fluorescent?

No, it is thought that just under a third of diamonds mined from the earth fluoresce.

This is yet another thing that serves to demonstrate quite how unique and fascinating every diamond really is. Around 70% of diamonds have no fluorescence at all, meaning that, in many cases, this subject doesn’t impact a shopper’s decision at all.

Still, it’s very important to know that fluorescence can exist in a diamond, and that it’s not always ‘no big deal’.

How Does GIA Grade Fluorescence?

The grades for fluorescence are: None, Faint, medium, Strong, and Very Strong.

While it is not talked about as much as the Four Cs, a diamond’s fluorescence is checked and recorded within its GIA report. Since it impacts a relatively small number of diamonds – and impacts the value of even fewer than that – the topic is not considered to be as pressing as other natural or human-made features.

Still, shoppers should be weary of any diamond that stray beyond the range of None, Faint or Medium. Strong and Very Strong Fluorescence is considered pretty undesirable, for a few key reasons…

What Does Strong Fluorescence Mean in a Diamond?

Strong fluorescence means that the diamond will glow bright blue under blacklight, and that it is likely to appear sort of ‘milky’ under normal lighting conditions.

It also means that its value could be up to 70% lower than it would be for a similar diamond with faint or no fluorescence, since the diamond’s appearance is permanently affected by its own fluorescence.

Why are Fluorescent Diamonds Worth Less?

Only diamonds with a strong – very strong fluorescence marked on their GIA certificate – strong enough for the diamond’s appearance to be impacted under blue lighting conditions – are worth less.

As we mentioned above, many diamonds fluoresce so weakly that this quality does not have any discernible impact on appearance under normal lighting conditions. In other words, whether the diamond is being in indoor lighting or in the sun, it will not appear to fluoresce.

When this fluorescence becomes too extreme, however, the diamond can look significantly worse than other diamonds with the same grades for cut, color, clarity, and carat. As we mentioned above, a diamond with strong fluorescence may even appear very hazy, and not sparkle as well as it otherwise could.

Is Faint Fluorescence OK in a Diamond?

Yes – you don’t have to avoid fluorescence altogether to find a beautiful diamond. Most diamonds that fluoresce will do so in a way that does not impact the stone under normal lighting conditions.

The GIA introduced this grading system for fluorescence because of the fact that plenty of diamonds fall into the gray area between having no fluorescence at all, and fluorescing so strongly that the beauty of the diamond is all but ruined.

Think of it a little like color. You don’t have to aim for a D Color diamond – or even one of the colorless grades – to find a diamond with no discernible yellow or brown tint. You can afford to shop comfortably around the range of G-I, without any fear of paying over the odds for a visibly discolored diamond.

The same thing holds true for fluorescence. Don’t shy away from any diamond graded with minor fluorescence – just avoid those with fluorescence strong enough to infringe upon the diamond’s everyday beauty.

Not necessarily, although it should be avoided in diamonds with a very high color grade, as any cloudiness can be more noticeable in these diamonds. In some diamonds, this level of fluorescence is actually thought to benefit the appearance of the stone.

Still, that’s not to say you have to pass up a beautiful diamond simply because of its grade. This is one area where you’ll really want to get the opinion of your jeweler, since they’re the experts in this field. It’s also a very compelling argument against shopping online, since it really is impossible for you to determine how much a diamond’s fluorescence will impact its appearance in real life.

Medium fluorescence still produces plenty of beautiful and wearable diamonds, but this category should be regarded as the upper limit and treated with caution as a result.

In diamonds with lower color grades – particularly those in the lower end of the Near Colorless category on the GIA’s Color Scale – some jewelers feel that a mild fluorescence can improve color, and counteract any slight tint the diamond might have.

Is Strong Blue Fluorescence in a Diamond Bad?

Yes, as this level of fluorescence will interfere with a diamond’s transparency, although some rare diamonds can fluoresce blue without looking milky.

No one wants a cloudy diamond. While they’re pretty interesting things to look at, they simply don’t live up to the expectations most of us hold for engagement rings, and will fall short on one of the most important traits a diamond has: sparkle.

As we mentioned above, however, there are a small number of diamonds that have strong fluorescence, but no milkiness. Some people (mainly collectors) enjoy tracking these diamonds down for their pretty unique properties and strong blue glow (when exposed to UV light).

Still, the overwhelming majority of buyers looking for a diamond for their engagement ring would prefer to stay safely within the lower grades, ensuring little to no fluorescence and a clear, bright, sparkling diamond.

So, What is the Best Fluorescence for a Diamond?

Anywhere from ‘None’ to ‘Medium’ on the GIA Scale, although, in any case, you should never settle on a diamond before you have seen it in person, as fluorescence – like any trait a diamond holds – will look different on every stone.

If you’re sticking firmly to the higher grades for color then, ideally, your diamond would have no fluorescence – but, as we said before, don’t let that deter you from an otherwise beautiful diamond. Provided you stick within this range, then the most important thing is what you and your jeweler think of the diamond – and, as we always say, whether or not you think it’s eye clean.

Chances are you don’t want to give your future bride a blue tinted diamond. While they’re pretty cool to look at, they’ll never replace clear, sparkling diamonds as the ultimate token to present when you propose.

Still, you don’t need to beat yourself up if your heart is pulling you toward a diamond that has a certain amount of fluorescence. Talk it through with your jeweler, weigh up the pros and (potential) cons, and let your instincts guide you the rest of the way.

Categories
4c's5Color5
Diamonds Near me 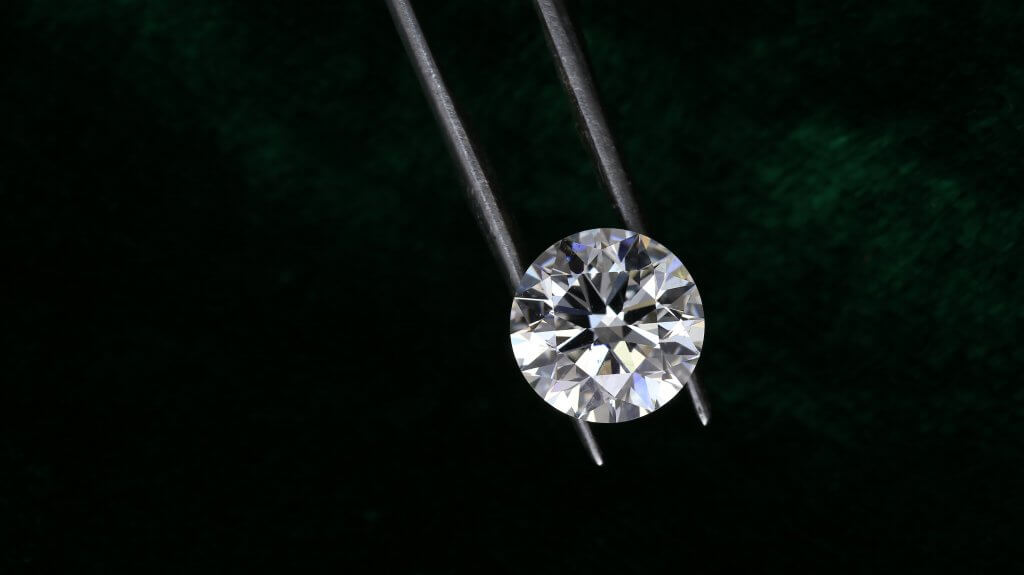 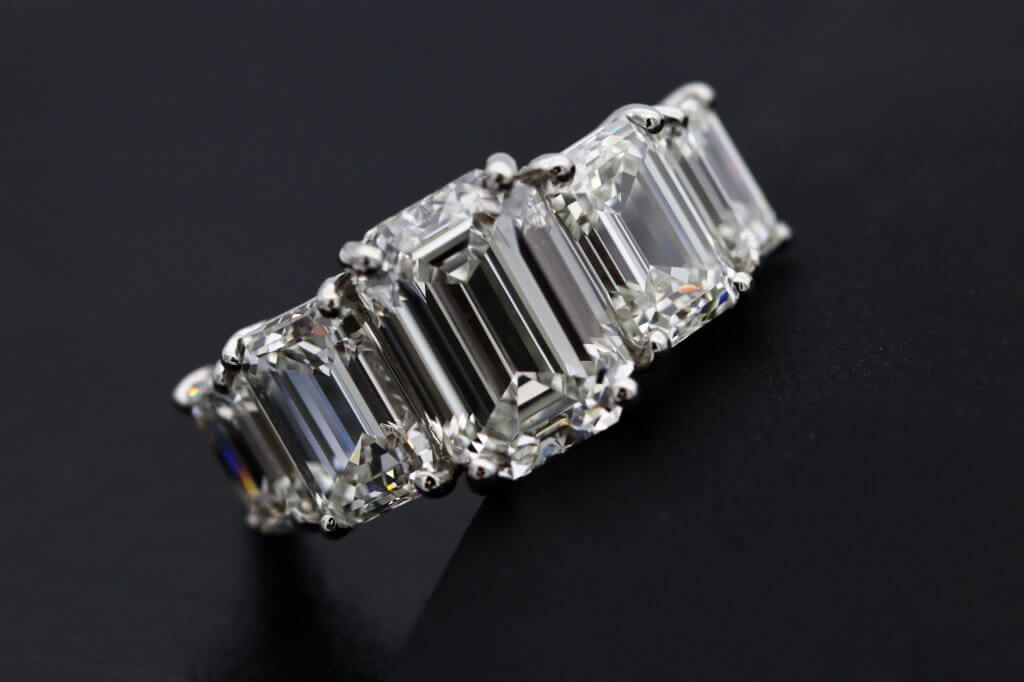 Everything You Need to Know About D Color Diamonds

Everything You Need to Know About F Color Diamonds