What is a Diamond Bow Tie?

If you’ve spent much time researching the Oval, Pear or Marquise diamond shapes, then there’s a strong chance you’ve come across the phrase ‘bow tie effect’ – and figured out that you’re going to want to avoid getting one in your diamond.

Bow ties are an issue for elongated cuts, and anyone in the market for one should be aware of that, although they bother some people more than others. That said, we have seen some extreme examples that would probably deter even the most laid-back shoppers, so being aware of what to look out for (and what to walk away from) is key.

Here’s what you need to know.

What is the Bow Tie Effect in Diamonds?

In a diamond, a bow tie is characterized by a band of darkness running through the center of the stone. As you’ve probably guessed, their name stems from their resemblance to a black tie.

In extreme cases, a bow tie can totally ruin the beauty of the stone. Most people are surprised to learn how dark and disruptive these bow ties can be – and how much of the diamond’s distinctive pattern can be lost within this blackhole, clearly visible through the middle of the crown and table.

Unfortunately, a black tie is most noticeable from through the diamond’s face-up view of the stone, which is exactly how you, the ring’s wearer, and everyone else will be viewing the stone.

What Causes the Bow Tie Effect?

A bow tie is caused by a combination of issues with the diamond’s cut, and light blockage, causing areas of heavy shadow across the center of the stone.

It’s not simply a case of ‘bad cut = bow tie’, however, because the shapes themselves – the Oval, Marquise, Pear cut and, sometimes, the Radiant (when cut to rectangular proportions) – are part of the problem. In fact, most of the diamonds cut to these shapes will feature some sort of bow tie, even if it isn’t all that noticeable.

In any diamond shape, every single facet is there to aid in the diamond’s light performance – to help it take in light, refract it through the center of the stone, emit it through the upper portion in flashes of white and colored light. When those facets are not positioned perfectly, dark spots (where the light isn’t able to reach) can occur within the diamond, making it impossible for certain areas within the stone to receive light.

Often, the issue is worse when you’re looking down into the diamond. As you block off some of the diamond’s light source, the errors in the facet structure are accentuated through the bow tie.

This risk is made significantly more likely in elongated shapes, which is why even the radiant can be affected by this phenomenon.

Do Round Brilliant Diamonds Get Bow Ties?

For the most part, no, Round Brilliant diamonds will not feature a bow tie.

This is a result of the proportions of the shape. The Round brilliant is evenly proportioned (provided it has been cut well), just as a Cushion cut with a ratio of 1:1 features even proportions, too. This means that light naturally travels through every area of the diamond evenly, and that the cutter does not have to plan against the risk of areas of reduced or blocked light.

Does the GIA Grade Bow Ties in Diamonds?

No. Whether or not a diamond features a bow tie is not listed within a GIA report.

Also, the complexity of bow ties means that it’s not always a risk eliminated by looking at only the best-cut diamonds. The only way to ensure that your diamond does not feature detrimental bow tie is to look at it carefully in real life. It’s impossible to know for sure if you’ve only got a couple photos and a video to go off.

Remember that every diamond is unique, and that even the smallest differences will mean two diamonds of the same size and quality will react differently to light, and obstructions. It would be very difficult to create a system for grading bow ties, since they range from being barely noticeable to consuming the middle portion of the diamond.

As a shopper, looking for a black tie is simply part of the experience of choosing a diamond – and another indisputable reason why shopping in person is far superior to shopping online.

Do All Oval Diamonds Have Bow Ties?

Most Oval diamonds will feature some sort of black tie, although it’s often very minor, and simply adds dimension to the diamond, rather than blocking out a substantial (and clearly noticeable) section from the light.

The same is true for Marquise and Pear diamonds – that most of the diamonds you encounter will feature some sort of bow tie. You may have to look twice before you spot it; you may need the jeweler to point it out to you and find that your partner never seems to notice; you may see it instantly. Of course, this begs the question…

Does a Bow Tie Have to be a Dealbreaker?

Not necessarily, and if you’re looking at one of the elongated fancy shapes, you’ll probably need to get used to the idea of a minor bow tie.

The bow tie may be as minor and insubstantial as a thin thread of shadow, or it may be disjointed enough to enhance the diamond’s light performance and scintillation. It may, however, totally destroy the impact of an otherwise beautiful diamond, and be bad enough to convince you to walk away without a second look.

It’s important to be aware of the fact that bow ties exist on a spectrum, rather than being ‘there or not’. Uneducated shoppers could easily fall into the trap of thinking that the dark band of shadow they see in their diamond is an unavoidable feature of certain shapes, so knowing how bad it can get – and how much of a bow tie you’re willing to put up with – is very important.

How to Avoid a Bad Bow Tie

Understanding the bow tie effect – what causes it, and which shapes it typically affects more than others – is the first step to ensuring you don’t walk home with a diamond afflicted by a nebulous black hole in its center.

But, as always, there’s more to it than that. Shoppers can have all the best intentions but, if they’re shopping from the wrong place – or in the wrong way – they’re vulnerable to making a major (and expensive) mistake.

As we mentioned above, the bow tie effect is yet another compelling reason to shop from a bricks-and-mortar jeweler, rather than an online vendor. Even with high quality photography, it’s near impossible for you to gauge what your diamond is going to look like in real life, under changing lighting, and on the back of a hand (as opposed to a colorless studio backdrop).

Diamonds behave differently under different conditions, and the only way to judge that properly is by being in the same conditions as the diamond.

Look for signs of a bow tie while you’re studying the diamond for visible color, and eye cleanliness. Hold the diamond directly in front of you – between six inches and a foot from your face – and there’s a good chance a significant bow tie will practically jump out at you.

If you’re on the fence, talk it through with your jeweler. A good jeweler won’t encourage anyone to drop thousands of dollars on a poor-quality diamond or rush you through the decision.

Bow ties are one of the more complex issues that diamond cutters, jewelers, and shoppers need to consider. For the cutter, overcoming the issue of light blockage within elongated shapes is incredibly tricky, and there’s no ‘one way’ of doing it. For jewelers and shoppers, addressing the phenomenon isn’t as simple as looking for a particular grade for Cut or Clarity. Since most elongated diamonds are afflicted to some extent, it’s almost impossible to avoid it unless you stick to shapes with even ratios.

When you head in for your consultation, keep in mind that every single diamond is unique, and that simply knowing the diamond you’re looking at features a bow tie isn’t a reason to put it down without a second thought.

Find a jeweler you can trust to steer you in the right direction and get used to the idea that your own analysis – even if you’ve never seen another diamond in real life before – holds a lot of value, too. If you think the diamond looks bad, don’t bother with it, but if you’re aware the diamond features a bow tie but still find yourself wondering what the big deal is, don’t be deterred.

Categories
Cut5
Diamonds Near me 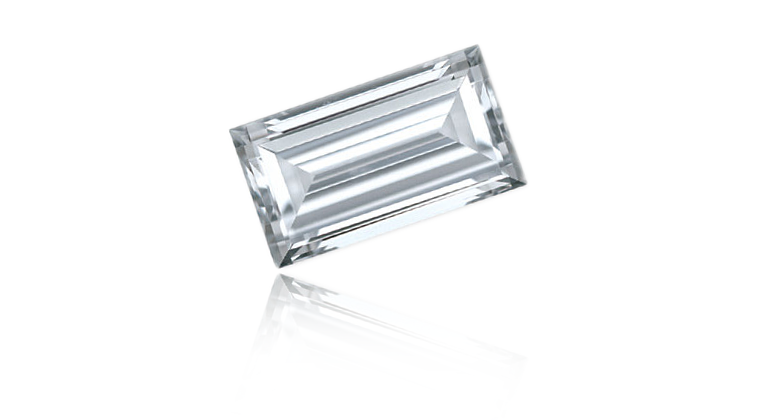 What is the Baguette Diamond Cut? 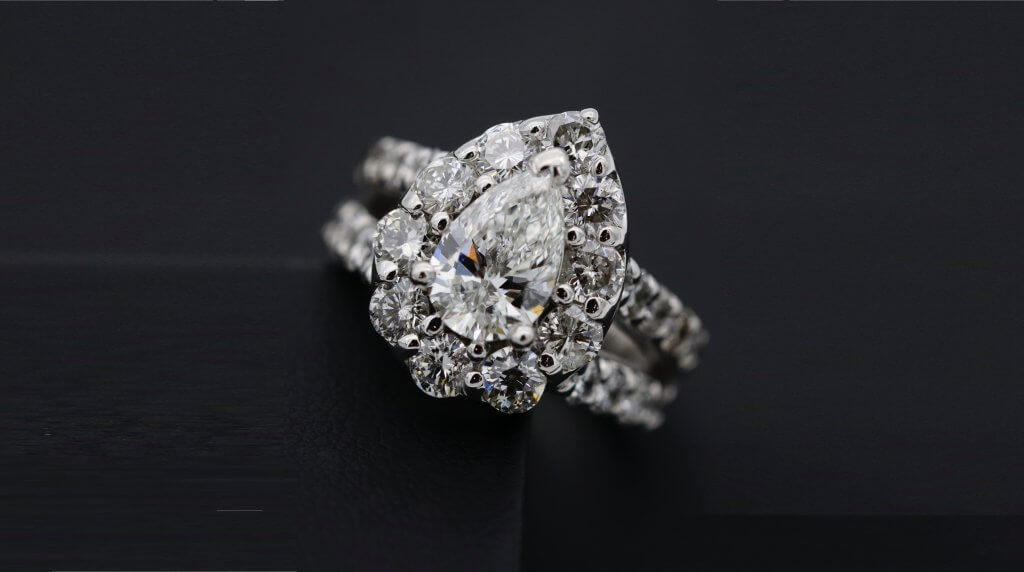 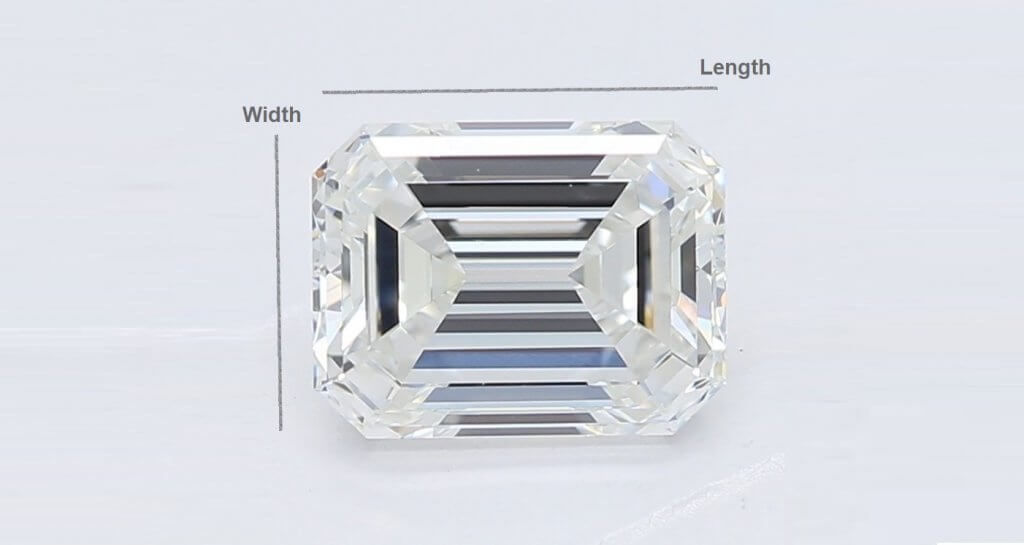