It is a rare occurrence for a diamond to be labelled ‘perfect’. Flawless diamonds – or, in other words, diamonds with no internal flaws identifiable under strong magnification – are incredibly rare, and many jewelers will go their entire lives without seeing on in person.

Even the world’s most prestigious jewelers – Cartier, Tiffany & Co., Van Cleef & Arpels – utilize diamonds within their work that are not technically perfect. Under strong enough magnification, natural defects known as inclusions will often be identifiable.

Most shoppers, by the time they are ready to invest, understand that finding a flawless diamond is not only out of the question, but also a waste of money. Many diamonds featuring inclusions that, under 10x magnification, look pretty significant still appear flawless to the naked eye.

Nevertheless, eye cleanliness isn’t an exact science. One diamond graded SI2 may look totally fine and beautiful, while another diamond with the same clarity grade may look visibly included. Some of these inclusions will appear as black spots, visible through the diamond’s table, crown, or pavilion.

Here’s what you need to know.

What are diamond black spots?

These are usually fragments of uncrystallized carbon, located deep within the diamond’s internal structure.

You probably already know by now that diamonds begin as carbon, and that the heat and pressure found deep in the earth’s mantle is responsible for causing it to crystalize and create rough diamond. Since nature doesn’t have a quality control process, it’s very easy for these diamonds to develop over small fragments of uncrystallized carbon – or to develop around traces of other minerals found underground.

As the name suggests, they appear as tiny, dark flecks. A diamond may have just one or two black spots, or many, many black spots scattered throughout its center. Other mineral crystals can cause colored spots within a diamond, but black is almost always caused by carbon.

If your diamond has a substantial area of reduced light running through it – a totally different kind of black spot – then this could be an example of the bow tie effect, which you can read our full guide to by clicking here.

Black spots are caused during the diamond’s formation, which means that any diamond you encounter with black spots developed them long, long before they were even mined from the earth – over a billion years before.

Diamonds are carbon. While most of them are not totally chemically pure (meaning that they do contain traces of other elements trapped within them) the only element that is actually required for a natural diamond to come into existence is carbon.

For the diamond to form, the carbon has to be subjected to intense heat and pressure over an incredibly long span of time. Very gradually, that carbon begins to crystalize and form into rough diamond.

Diamonds are a great example of the raw power of nature, but that raw power does not produce ‘perfect’ results every time. Sometimes, the results of that power are highly valued – for instance, in fancy colored diamonds, which are often created as a result of chemical impurities – but others, like black spots, are undesirable.

No. Black spots are naturally-occurring, but they do not appear spontaneously. They formed a long, long time ago as a result of the conditions deep underground, and can’t simply appear from thin air – no matter how old the diamond in question is.

Once brought to the surface, cut, and polished, a diamond can sustain surface damage. While they are very durable, it is possible for them to get scratched, chipped, or grazed. They cannot, however, sustain any damage or flaws internally.

Some diamonds have been kept and worn for decades – or even centuries – and their inclusions (if they have any) are still exactly what they were when they were first mined all those years ago.

Can diamond black spots be fixed?

Yes, but mostly no. A diamond can be artificially enhanced to remove unsightly and value-lowering black spots, but doing so comes at a big price.

Over the years, a number of diamond enhancement techniques have been developed. They are intended to raise the value of lower quality diamonds, while offering buyers a cheaper alternative to stones that are naturally of a high quality. In an ideal world, a win-win for the seller and the buyer.

In reality, it doesn’t tend to play out that way, and a lot of jewelers and vendors refuse to sell enhanced diamonds.

If you’re wondering what they do about the laser hold left in the diamond, then you’ve reached the real sticking-point for enhanced diamonds. There is no permanent solution to creating a hole in a diamond – and, if the stone is intended to be worn and enjoyed, it’s totally counterintuitive.

These laser drill holes can gather dirt and oils and become more obvious over time – and, while a glassy substance can be used to fill the hole, it’s not permanent. As you can imagine, having an opening in your diamond also makes it more vulnerable to taking on permanent damage, and should be considered one of the worst inclusions a diamond can have.

Besides, part of the appeal of natural diamonds is that they’re natural, which is why so many gemologists and jewelers refuse to work with enhanced diamonds.

How do you know if your diamond has black spots?

You might be able to see them with your naked eye but, if not, you’ll be able to identify them by looking at your diamond’s GIA report, which features a diamond plot detailing the location of most of the diamond’s inclusions.

There may not be any reliable answer to the old riddle about trees falling in empty woods, but how about this one: if a diamond features a black spot, but it’s too small to see with the naked eye, does it even matter?

In our opinion, no, it doesn’t matter. There are a few types of inclusions we would urge our readers to avoid at all costs (including laser drill holes) but, in general, provided the inclusion is not located right at the diamond’s surface, and provided you can’t see it with your own eyes, it shouldn’t deter you from an otherwise great investment.

In any case, you’ll want to go carefully through the specifics of your diamond’s clarity, as they have been listed within the GIA report. The GIA’s diamond graders study the diamond at 10x magnification, which means that they’ll be able to identify a lot more than you could on your own.

Black spots will be represented on a GIA diamond plot by a small, red circle. This symbol is used to identify any crystals (of any color) within the diamond.

Can diamond inclusions get worse?

No. Internal flaws are caused long, long before the diamond even makes it to the earth’s surface and are, quite literally, ‘set in stone’ by the time you purchase your diamond.

By that we mean that any black spots identifiable within your diamond will stay exactly as they are, no matter how many years go by. They don’t grow, darken, or multiply, and are totally locked within your diamond’s internal structure.

The only thing that really makes a minor inclusion worse is an artificial clarity enhancement, since that introduces a totally new problem for the diamond, and makes it very likely that the stone will start to look worse after a few years of wear.

So, Are Diamond Black Spots Anything to Worry About?

Not necessarily. If they impact the stone’s beauty, then you’ll definitely want to walk away and find another option. If they’re only visible under magnification, and not located right at the surface of the diamond, then you don’t need to worry about them.

This brings us to the crux of the issue – that, in order to make a good decision, you’ve got to be able to see your diamond in person before you buy it. It’s no good going online, reading a GIA report, and going off what you can see in the picture. In fact, since those pictures are almost always magnified, there’s every chance you’ll pass-up a diamond that, in real life, would have been eye clean.

Buying a diamond from a real, reputable jewelry store means being able to ensure that it passes every test, and that you’re not overspending on it – or, even worse, walking home with a diamond that looks way worse in quality than others of a similar price. 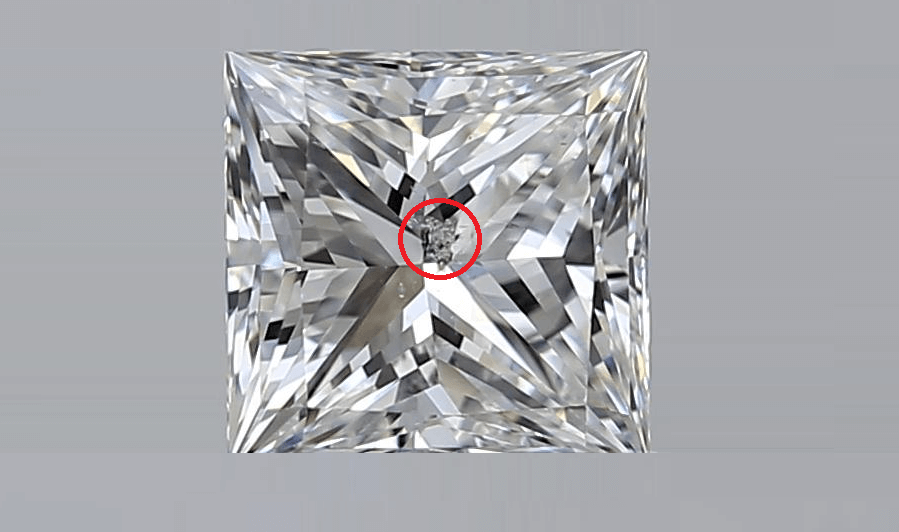 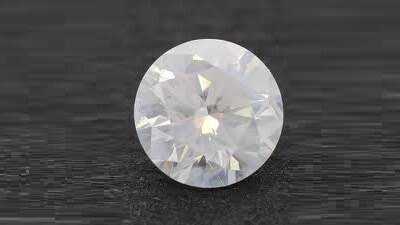